Ok... so what does this mean? is this proper? is this legal?
On the 14th of May 2012, the Higher Constitutional court has announced a verdict that the laws that have assigned the parliament were flawed, thus the one third of the parliament has been "unconstitutionally elected" ... period, so what is going on today is that numerous people are going around not knowing the crucial role of this court...

Translation?, yeah that's what i thought... basically, this means that the verdict of the Higher constitutional court is automatically applied from its date (14/6/2012), and does NOT need a verdict calling for the executive authority to dissolve the parliament, but regardless, the executive authority DID indeed secure the parliament the next Friday morning, following the court's verdict on Thursday.


Again, translation, the court has moreover announced that due to the previously mentioned articles (no need to mention them now), which allows political parties the right to run on third of the individual seats, assigned for independents, the court has decided to dissolve the entire parliament, as it is not fully and properly created, and thus needs to be re-elected on.

Ok, So having THAT said... what other problems are their in the presidential decision today?

After a record High of 20 tweets, and reading 5 articles, and debating with 200 people in the past 4 hours only... i will simply put my fear as this... 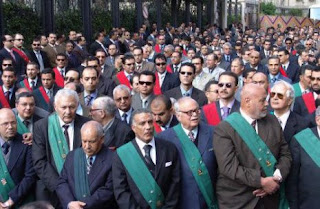 1-I do NOT disagree with the presidential decision because its illegal... (i mean i do, but this Isn't my main concern)... what REALLY depresses me is that the president did NOT have the balls to free 12,000 civilians, does not have the Balls to Interfere in Syria, does not have the balls to Make REAL Changes... and for teh past week, ALL developments in the country were towards Ikhwan gaining more authority, such as the Public Newspapers, Labor Unions, and Now parliament.

2- i do NOT find it logical, ethical, or legal for the President to reverse a law or a Verdict that has BEEN announced before he was president, just because he doesn't "like" it, or finds it illegal, the President is NOT a judge, and is certainly NOT over the general prosecutor, the President should NOT use his power to manipulate the law for his personal "political party's" interest.

3- having said point three... the President needs to resign, as promised from FJP, and the Ikhwan, the President needs to have the balls to respect the oath he took in front of the Constitutional court, in respecting the court's verdicts, and needs to be a president for ALL Egyptians by releasing the 12,000 civilian prisoners under military trials, he needs to form a Government, as it has been 1 week, and its not like he wasn't expecting he was going to be president, and FINALLY he needs to RESPECT the court's decision, and the previous Executive Decision, even if i do not agree with them...

We are putting a STATE of LAW, and not a state of interests... sorry Morsy, you FAILED to gain the respect needed in the first week...

Posted by Hafez Analyzes at 3:20 PM No comments: